When I say, "Marriage Ain't for Wimps," it's more than just a cute, catchy cliché. It really is not for the weak or immature. Let me explain...

If it is your desire to have a successful, fulfilling, mutually satisfying marriage, you're going to have to die!

Now, while that all of that seems like a no-brainer, many people enter into their marriage with a list of unspoken and unrealistic expectations. And when those expectations are not met, they resort to different tactics or retreat to familiar habits from their single days. What you don't heal in your singleness will manifest in your marriage. When I married my husband, I was still insecure and I brought with me a lot of feelings of inadequacy, shame, and guilt. I wanted marriage to somehow heal my broken, damaged places. By committing to a marriage, I thought all of my issues would (magically) disappear, right? Wrong! They were magnified! So when things came up, my insecure, fearful, angry self showed up, too.

The Bible has this to say about LOVE:

[Love]
"Doesn’t force itself on others, Isn’t always “me first,”
Doesn’t fly off the handle,
Doesn’t keep score of the sins of others,
Doesn’t revel when others grovel,
Takes pleasure in the flowering of truth,
Puts up with anything,
Trusts God always,
Always looks for the best,
Never looks back,
But keeps going to the end."
(1 Corinthians 13:5-7 MSG)

Whew! I'll be the first to admit that some of those statements are hard for me to swallow. As much as I love my husband, in my humanness, I may not always display it. And that's where prayer, communication, good mentoring and willingness to grow come in. It took me years to realize that marriage is not all about making you happy, but more about helping you become the person God desires you to be.

So if you're focused on getting your needs met and looking to be happier, don't bother. But if you're willing to pull back so that you can move forward, cheer when no one is listening, pray in secret, love unconditionally, and serve unselfishly, THEN you are ready to take this journey. And if you were like me, deep in the thick of it before you got a clue, no worries. Trust and believe, God is able to restore, repair & renew.

And one final note...If all of this just seems like a lot of work, IT IS! But the beautiful thing is that you will reap a handsome return on your investment. So, adjust your attitude, fine-tune your expectations, commit 100% and enjoy the life of a Mature Wife.

Tangie,
The Maturing Wife
#MarriageAintForWimps
Posted by Unknown at Monday, July 13, 2015 No comments:

I got married at the tender age of 23. With almost no counseling & even fewer examples, I embarked upon the life of being my husband's "good thing." However, very soon thereafter I learned that being a wife is harder than it looks. And being a mature wife? Well, let's just say that it has taken me many years, almost 20 to be exact, to mature into a wife worthy to be called "A Good Thing." (Prov. 18:22) 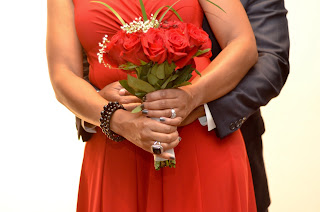 Over the next several weeks I'm going to do a blog series called, "The Mature Wife." I came up with this idea as I was thinking about the days leading up to my 20th year wedding anniversary. Although my marital fantasy dictated that my husband and I take a long, romantic trip to Fiji or Europe for our anniversary, our priorities and other goals suggested a more modest celebration. At any rate, I started thinking about how I had matured over the years. There was a time when I would have been really bratty and insisted on some type of pomp and circumstance "just because." Don't get me wrong, I am, by no means, downplaying the amazing accomplishment of being married for 20 years. But what I am saying is that, if both my husband and I agree to work toward certain goals that would possibly be deferred because of a certain purchase or activity, then we need to re-evaluate some things. And in my maturity, I have learned this.

The bible says that the older women are to teach the younger women to love their husbands (Titus 2:4). That scripture always intrigued me because one would think loving their husband would be a natural, organic process that did not need instruction. Right?  But I found out the contrary. And when I would seek wisdom from "older" women early in my marriage, they had very little to offer because they were struggling themselves. So it is my hope that you will be able to glean some nuggets of wisdom from the things I will be sharing in the coming weeks. Whether you're single, engaged, married or otherwise, I believe we can never amass enough tools in our "Marriage Box."

Stay tuned for my blog series, "The Mature Wife."

To Marriage With Love,
Tangie

#MarriageAintforWimps
Posted by Unknown at Sunday, July 12, 2015 No comments:

The Purpose of the Marriage Ain't for Wimps Blog is to offer a source of encouragement and insight to married or soon-to-be-married individuals. I believe in the marriage of one man to one woman. And as a Marriage Mentor & Coach, I will offer tried-and-true strategies to staying married successfully. This concept grew out of my frustration with seeing couples give up on their marriages. I've been married for 2 decades to my husband and everything hasn't been rosy, but we're committed to making it work and I'd like to encourage you to do the same. I welcome all comments and questions at Marriage@MarriageAintforWimps.com.

Also, visit my official website, www.InspiredSistah.com, where I inspire women to live on top of the world.